One of BMP design's first project cars is this BMW 528i e12 1979. I still remember the photo session across the channel of the Queen Mary Cruise Ship in Long Beach California. The most difficult part of the photo shoot was waiting for all the roller skaters, pedestrians, and bicyclists to pass so that we could get a clear shot. 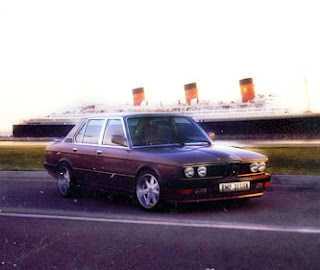 The BMW M5 styling kit fits all BMW 5 series e12, e28 body codes from 1975 until 1988. This includes U.S. and European style bodies. The kit was originally designed by Edmund Breyton of Breyton Design in Stockach Germany 78333. As the exclusive importer for Breyton design for over 10 years BMPdesign imported the kits since 1983. The kit was also marketed by AC Schnitzer of Aachen Germany 52078. The original BMW Breyton Design M5 styling kit was constructed of high quality hand laminated polyester fiberglass resin. Over the last 25 plus years we have sold many of these kits to BMW e12 and e28 owners here in the U.S. market. Our own service department installed over 70 sets. It was early 1984 that we discovered the original kit for the 528e, 533i e28 body would also fit the early 530i, 528i e12 body style. Although this required some slight hardware modification the actual fit was perfect. The kit was most popular in the late 80's and early 90's. A high number of the kits were sold to BMW owners who had suffered a collision. When doing the math the upgrade look of the M5 kit was about the same price as the factory body and bumper components. Today we still sell a several kits per month. We currently sell most of the components to individuals that are looking to restore an existing vehicle or needing replacement components.
The original kit (item 65811) from Breyton design included a front bumper spoiler (item 29511), side skirts (item 29691),rear bumper skirt (item 29801), read trunk wing (item 30071), fender arches and side door panels. Although the door panels and fender arches added a sporty wide body look to the vehicle, the additional cost for these parts, along with painting and labor made the overall kit price far too expensive. If you look closely at the vehicle shown you can see the fender trims, and extended door panels.
Although in the early years we had plenty of photos of the kit installed on 528e, 533i, 535i e28 vehicles we did not have any photos of a 530i or 528i e12 body style with the body kit installed. For this reason in the early 80's we purchased a 1979 528i e12 as one of our early project cars. Our goal with the vehicle was to show the BMW enthusiast what could be done with one of BMW's least popular sedans of the time. Although the U.S. 5 series e12 was popular as a family sedan it did not get the same performance spot light as it's counter part in Europe. This was largely due to the limited engine choices and factory upgrades available to the U.S. market.
The BMP design 528i e12 project car for 1987 started life as a 1979 528i automatic. The 1979 model year was 2nd generation face lift for the popular e12 body style. The 1979 model was an engine displacement down size from the 1978 530i 3.0 liter to 2.8 liter and a transmission upgrade from 4 speed to overdrive 5 speed manual transmission. The goal was to install a 3.5 liter 218 H.P. European engine to improved performance. Upgrade suspension components with Bilstein sport shocks with H&R sport lowering springs, and upgraded sway bars. The wheels we installed were a set of Breyton Design 9X17 seven spoke alloys with 215/45/17 tires up front and 225/40/17 in the rear. Body styling was the stylish aerodynamic kit by Breyton. Installation required very little modification. Rear bumper skirt assembly required removing the rear bumper shocks and drilling two holes to allow for bolting the unit to the rear lower body panel. The front bumper spoiler required removing the front bumper shocks from the vehicle. Fabricating a solid bumper mount bracket for each side and bolting the kit securely to the front frame rails. Turn signals and fog lights were factory units from the e28 European version. Removing and filling the front fender corner turn signal units of the U.S. version give the e12 a much more sleek appearance. The final touch is an M3 style rear trunk spoiler, which secured directly to the rear trunk lid with four 6MM bolts.